Bruce Peden – RLN Chairman of the Board

2014 is the last year that I stand as Chairman of RLN. Both myself and Tom Jackson have been Board Members since Rugby League Northland inception in 2010 and due to constitutional process both myself and Tom will be stepping down at the next AGM. I can say that I will be stepping down confident that the game has moved in the right direction. As a organisation, the work is by no means completed, however there is a solid foundation for sustainability.

In our first four years our organisational priorities have been to:

We have recruited a talented Board of Directors who will now steer the organisation into a refined Strategic Direction. The above priorities will remain in place however our focus will move more toward quality improvement.

Our new strategic plan will align – NZRL – RLN and our Clubs, developing the three levels of League within NZRL to move together to build our future.

There are three key areas that we will focus on:

Everything RLN does needs to have a long term effect on improving Rugby League – Our Game!

The game of Rugby League is for everyone. RLN exists to serve the Rugby League Community of Northland. For the game to improve and grow, so does the RLN Community. The Kiwi is the pinnacle of the game. To support the Kiwi, we need to recognise all elements of Iwi (people) that make up Kiwi – Te Iwi Kiwi.

To develop and grow we need to ensure that RLN and our activities are planned within the means of our operation. We need to protect, grow and develop our resources from our people to our financial operation.

Finally on behalf of the board I would like to thank all of our valued sponsors and funders for your support this season, I would also like to thank the players and volunteers for making this a successful season.

WOW – what a week for League in Northland.  To have two quality teams in Whangarei for a week was a great event!  We were fortunate that the Test Match coincided with the Northland Primary School Championship Finals.  The Thursday before the Test, 31 teams from 26 Primary Schools from Ruawai to Kaitaia and everywhere in between flocked to Kensington Park to see who would make the final and get to play the Curtain Raiser on Toll Stadium.  Oh and lets not forget, that the FULL Kiwi and Samoan Team came along for a mass signing session with the kids!

The tournament was played in two grades – Years 4-6 and 7-8, the teams qualified from their regional qualifying tournament.  In the Year 4-6 grade Whau Valley defeated Maungatapere and in the Year 7-8 grade Whangarei Intermediate defeated Bream Bay.  Congratulations to Whau Valley and Whangarei Intermediate.  A big thank you to the 26 Swords 15s and 17s who attended the day as Referees and Tournament Officials!

Then on to the test match!  17,000 fans at Toll Stadium – brilliant sunshine, great atmosphere – what an advert for Northland!  The Whangarei Council estimated that the event was worth $4 million to the local community!  The Kiwis scraped home against a big aggressive Samoan pack to ensure that the home supporters left happy.

So what is the legacy of the match?  The event was staged as a test event for the 2017 World Cup which NZRL joint host with Australia.  So we can only hope that Toll secures some games in 2017.  However, shorter term, RLN and Toll Stadium will explore opportunities of hosting some high profile games in 2016… NRL games in Northland?  Everything is possible.

The Leadership through League programme continues RLN’s strategic plan, embracing our Mantra ”More than just a game.”  Based on the maori philosophy of Tuakana Teina of older sibling teaching younger sibling, students use Rugby League as a vehicle to learn about coaching and leadership, who in turn, coach Primary School students, in their community.  In total we have qualified 159 coaches from 11 Colleges, who in turn have coached over 2,996 Primary School kids in 41 Primary Schools across Northland.

On the back of Leadership through League – RLN has developed a school calendar where every school in Northland now has an opportunity to play League at a festival!

Other school programs included the NorthTec Adam Blair Trophy (NABT) our College Program. We had an increase from 8 Colleges to 10 Colleges in 2014. The NABT continues to be a highlight on the Northland College Program and testament to the competition was our finals night at Hikurangi, with a huge crowd flocking to see Kamo High School take out the trophy for their first time.

Testament to the quality of the competition was the NABT XIII’s (our Secondary School Representative Team) narrow loss to a Warriors Development Team 42 – 28 after leading for a good portion of the game.

We also had 10 Colleges play in the Year 9 and 10 Nine-a-Side Challenge Shield, with Whangarei Boys High School winning the title.

For the first time ever RLN hosted Lightning League for College Girls, where Okaihau College took out the title from four other colleges.

Club League was again vibrant. The 10 team MuliKai Cooker Premiership saw an climatic finish to the senior season with Otangarei Knights going on a three match winning streak to firstly defeat the Portland Panthers, then shock minor Premiers the Takahiwai Warriors, then come from a 26 – 12 deficit with less than 20 minutes to play to stop Hikurangi from winning their fourth straight victory!

The Bluegoose every Sunday was a great place to be, with over 500 kids playing every week.  The 13s, 15s and 18s all had good numbers and you can really see the improvement in the quality of the game.  The Muriwhenua Rubgy League Club hosted a four school, after school mini mod competition.

Next year will see some changes in junior league with the grades changing to evens to see 6s, 8s, 10s, 12s, 14s , 16s and 18s grades.  With the 16s and 18s moving to play Saturday football.  We are also exploring the opportunity of moving Mini Mod League in the Mid North to be a mid-week after school competition with a mix of school and club teams competing. 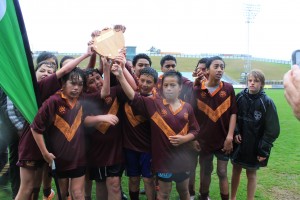 The Swords 13s travelled to the RULA District Tournament in Mt Maunganui and finished 4th, whilst the Swords 15s finished 8th of 8 in the NZRL National Tournament.  However they were very competitive in every game and were runners up in the Upper Central Zone district tournament.

On a more positive note, 6 players trialled for the NZRL 16/18s Kiwi teams. Tumoana Halkyard was selected in the NZ Universities team to play as the curtain raiser in the Kiwis v England game.  James Dean Fisher-Harris and Kalani Going were selected in the Taurahere Kiwi U18s (ex-pat Kiwi teams). Plus, 3 Northlanders made their U20s Holden Cup debut – Corey Harawira-Naera and James Dean Fisher-Harris (for the Penrith Panthers) and Jordan Aiono Fatu (for the Canberra Raiders).

Walk into any smoko room on a building site and you are bound to hear banter about who the best trade is on site. Each trade reckons that they are the most important people on site and that they do the best work and the others are always the spanner in the works holding the site up!

In Northland, the trades now have the ability to stand behind their reputation – stand by their fellow tradesmen – put their ego where their mouth is and walk the walk, that they have been talking.

It comes in the form of the “Frings Trade of Origin” and the first trade, to gain bragging rights, were the Placemaker Chippies, as they won the inaugural Frings Trade of Origin 2 – 1, by winning the deciding match 50 – 28 over the Scott Electrical Sparkies, in a bruising encounter at Mangakahia Sports Club on Saturday 29th November.

The Frings Trade of Origin was a concept devised by Andy Liddall, from Attina Electrical, who engaged Scott Electrical to support the concept from the electrical Side. Scott Electrical Director, John Cornwall, is a devout league man and is an avid sponsor and supporter of the Vodafone Warriors, so they became a natural supporter for the Sparkies.

The next challenge was to get another trade to play against – the natural target according to Andy were the builders as they are the always the loudest on any building site. So he approached old time mate Matt Legg,from WRC Construction, who recently returned to Northland from Australia where he fell in love with League.

Meanwhile Andy had another “bright spark” moment, engaging the support of Placemakers for the Chippies, with Placemakers seeing an opportunity to promote community sport, while developing camaraderie within the building trade.

Andy also gained the support of Rugby League Northland who jumped at the chance to support the concept, “People are getting busier and busier and some guys just can’t commit to playing regular weekend sport – the Frings Trade of Origin concept allows guys an opportunity to play a few games of league without having to make a commitment,” said RLN GM General Manager Alex Smits.

“We wanted to develop the concept so we partnered up Frings Brauhaus Brewery to sponsor the series. Frings are a local Brewery and Bar in Whangarei so it was perfect fit for the concept and for them.” Smits said.

The Placemaker Chippies won the first match 40 – 16. The Scott Electrical Sparkies bounced back to win the second match 38 – 16. The Chippies were too strong in the deciding match. It was a tough physical encounter with no love lost between the two teams. The Chippies dominated the first half going to a 26 – 6 lead at half time. However, the Sparkies were first to score in the second spell and then clawed their way back to a 6 point deficit at one stage, only for the Chippies to storm home with three late tries and win 50 – 28.

It is hoped that the Trade of Origin concept will grow in 2015, the Civil Engineers, Drainlayers, Sheet Metal Workers, Fireman and even a local Farming group have all expressed and interest! Watch this space in 2015!

Thank you to our Sponsors, working together we are making a difference.